This is the day when the young pay their respect to their elders and when old and broken friendships are renewed.

NowRuz or New day, is the first day of spring and the beginning of the Iranian calendar year.

NowRuz is the day when light prevails over darkness, and the revival of nature begins.

NowRuz is a non-religious celebration that is cherished by all Iranians of all backgrounds. It is customary that the exact time change from winter to spring is calculated, usually falling on March 20th or 21st. A few minutes before NowRuz the entire family gathers together around the "Haft Seen" table, offering prayers and wishing for a happy and healthy year. when the time arrives, there is cheering, kissing and hugging. Everyone eats sweets and the head of the family gives gifts and gold coins to all present.

As we all know, the essence of any civilization is captured in its celebrations, for it is in these festivities that the symbols, ideas and institutions that are cherished most by the people of a nation are brought forth and renewed. One of the greatest sources of pleasure for Iranians is other Iranians. What joy there is in Iran in socializing, being with other people, talking, walking, arguing, bargaining, boasting, flattering, joking, sympathizing, complaining, exaggerating and, above all, crying and laughing. At the center of all is the joy that arises from the family. Iranian families are close?knit, extended and loyal. Children, of course, are the chief source of pleasure in a family. So it is not surprising if the two celebrations which are important for Iranians, and which are occasions for joy have as their bases the family unification. One, the marriage celebration has its origin in the realm of the family and its social network. I am not going to talk about this one today and save it for another occasion.

The second celebration is the Iranian New Year, Now-Ruz, which starts on March 21st the first day of spring and the beginning of Iranian Calendar. This celebration continues for more than two weeks, from the last Wednesday of the year until the thirteenth day after the New Year. During this time many festivities take place. A primary emphasis during Now-Ruz is on nature. Fire, water, earth and air all figure prominently. Social gatherings, food and contact with the outdoors are emphasized. Preparations for the holiday begin weeks in advance. Every home must have not only a complete and thorough cleaning, but painting is done and needed repairs are made. Everything is to be in order for the coming year, nothing is to be left undone ? including the paying off of all debts. Everyone in the family must wear new clothes as the new year begins. Gifts and gold coins are given and taken too. Therefore, weeks ahead of time many shopping trips take place.

Two weeks before, each family prepares a bowl of water scattered with grain seed and left to germinate. This bowl of greens symbolizes the coming of spring and is one of the oldest of traditions. During the 13 days of the celebrations, endless visits to relatives and friends are traditional and considered obligatory. The first day is reserved for the oldest and most respected members of the family. The Now-Ruz celebrations are unique to Iran and go back as far as recorded history. The true beginnings are a bit hazy and clouded with time, full of myths and legends, and romanced in the poetry of the past.

One such legend tells us that the world rests on one of the horns of Taurus, the bull. Once a year, he tires of the load and shifts his burden to the other horn. This sudden jolt to the earth, is, quite naturally, makes an egg roll on the mirror in the center of "the Haft Seen Table" which is the traditional table set for New Year and I will talk about it later.

A strange little man, with a long and interesting history, wandered into the Now-Ruz celebrations centuries ago and reappears each year a few days before the formal festivities begin. This lively, happy?go?lucky fellow with a black, polished face, wearing a conical hat and dressed in clown?like clothes with red baggy trousers, sets the mood for this time of rejoicing and merry?making as he sings and dances through the streets with his tambourine for the delight of young and old alike.

Fire plays another important role in the ceremonies of Now-Ruz, on the last Wednesday of the year, called Chahr?Shanbeh Suri. In the traditional reckoning of time, each day starts at sunset of the previous night. Thus the observance of Chahr?Shanbeh Suri actually begins on Tuesday night. On this night each family takes dried thorns and bushes gathered from the plains and mountains and arranges them in either three, five or seven piles in the house, in the courtyard or in the street. As the sun sets and night falls, men and women, young and old, gather around the piles of tinder and light them. Then they dance around the fires singing songs. One at a time, each family member jumps over the flames and chants verses like the following:

May sadness go and happiness come

May suffering go and blessing come

Grant me my desires

My yellow to you

Your red to me

When the fires have died down to ashes, a woman from each family gathers the ashes in a dustpan and carries them away to a nearby street corner or stream and throws them away. She then returns home and raps loudly on the door, telling the family members that she has just come from a wedding and is bringing happiness and blessings for the family. The door is opened, and in this way the family ensures itself of blessings for the coming years.

Iranians, by burning fires at this time, eliminate ugliness and impurity from their lives.

The exact second of the change from old to new year is calculated. A few minutes before Now Ruz, the entire family gathers around the table, offers prayers and when the announcement arrives, there is the usual cheering and clapping, hugging and kissing. Everyone sitting around the table, sweetens his or her mouth with Shirini (Sweets) that come from the decorated table. The head of the family distributes gifts (usually gold coins) to all present. Before the family on a table is a ceremonial display consisting of a copy of the holy book, sprouted grains and lentils, and seven items beginning with the Persian letter "seen", corresponding to the English "s". The most common items on todays Haft Seen (Seven S's) are:

Senjed: a kind of sweet, dry, pithy fruit, symbolizes regeneration and new life because of its seed.

Seer: Garlic, symbolizes wealth. It is believed to keep us away from sickness in the coming new year.

Serkeh: Vinegar is believed to bring energy and strength.

Samanoo: A sweet porridge made from sprouted wheat and flour symbolizes freedom. It is believed to bring strength and productivity in the upcoming year.

Sekeh: Gold coin symbolizes wealth. It is believed to bring courage in the upcoming year.

Quite often you will find also:

Seeb: Red apple symbolizes knowledge and long life. It is believed to bring healthy and happy look to people.

Sombol: Hyacinth, a spring flower, symbolizes peace, love, and kindness. It also gives a pleasant scent to the haft?seen table.

Sangak: bread added to the display.

Colored eggs, one for each member of the family, brighten the decor. A mirror with an egg placed on it has appeared so that everyone can watch for the movement of the egg as Taurus flips the world to the other horn. Light, representing the goodness is symbolized in the candles that are left to burn themselves out. A bowl of water with goldfish also symbolizing light, brings good luck in the coming year if you are gazing into it at the moment of the new year.

The traditional meal for the first day of Now-Ruz is broiled fish and Rice mixed with edible greens.

The thirteenth day of Now-Ruz, according to tradition, must be spent out of doors. Consequently, Iranian families leave their homes on that morning with carpets, gelims and picnic materials to search out gardens and areas beside streams and under trees. Every family has brought the sprouted wheat and lentils from their Now-Ruz table and they cast them away for good luck.

On this day it is also considered lucky to eat a special thick soup made with noodles. Families take the soup and all the necessary garnishes ? fried onions, garlic, dried yogurt, sauce and vinegar ? along with them. It is also important to take fresh lettuce to be eaten with vinegar and honey. Of course, a samovar for tea and a water pipe are also necessary, along with drums, tambourines and melody?producing instruments for singing and dancing.

Once the families reach their destination, clustered in small groups under the trees on the banks of streams, they spread their carpets, light their samovars, make wood fires and set their thick noodle soup to heat. While their elders smoke their water pipes, the young people play at their own games ? leapfrog, seesaw, swinging, volleyball and many others. Some play with cards or dice, or engage in a game of backgammon or chess.

At noon each family spreads out its food and all eat a substantial soup, there is green herb pilaf, fried fish and kuku, a fried omelet?like dish thick with chopped greens. The lettuce, vinegar and honey are eaten only in the afternoon as a snack after a siesta of two or three hours.

During the whole day itinerant musicians with monkeys' and bears, jugglers, magicians, strong men and the inevitable welcomer of the New Year, Haji Firuz, move from group to group entertaining the picnickers.

On the thirteenth of Now-Ruz young girls tie knots in the grass they find on the plains in order to ensure they find husbands during the New Year. A Khorasani verse concerning this day goes as follows:

The Now-Ruz holidays capture the Iranians' need to come to terms with nature, the spirit and each other. In music, poetry, socializing and pleasurable activity, the renewal of the cycle that gives rise to the undercurrent of deep, quiet satisfaction is given concrete expression. It is thus fitting that the New Year should begin with a large measure of those small things which seem to produce joy in limited quantities but which ultimately give life itself its primary meaning. 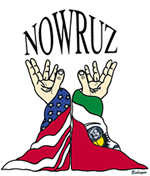